12 Days of Christmas Blessings is now at day 10. Today I’m sharing a post from a fellow-blogger, Brad Stanton, who wrote this article about Charles Dickens. Many thousands of people connect Dickens with “A Christmas Carol,” which has become world-famous as the quintessential Christmas story and has been portrayed in a hundred different ways all over the world. But Brad shares another aspect of Charles Dickens’ life in this article and another way in which the author affected the whole world with many other novels that he wrote. I hope you enjoy the post. 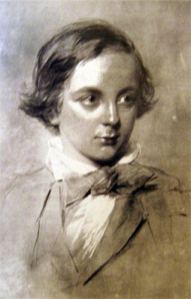 If I voted for the best writer of English literature, I would vote for Charles Dickens. His writings about orphans enlightened and changed the way people perceived homeless children and brought about great positive change for them. The photo is Dickens as a boy.

Dickens had to quit school and go to work in a factory after his father went to debtors’ prison. He had very little formal education, but he became one of the greatest writers of English literature. He enjoyed more popularity and fame than any writer of his time.

One reason his writing is so good is that he published novels on installments. That means he published a little each week and eventually the writings made up a complete novel (similar to blogging today). He got feedback regularly and changed his writing accordingly.