Today is a sad day for me. My father passed away. But because he loved the Lord Jesus Christ with all of his heart and has served Him faithfully since he was 12 years old, he went right from our family’s presence into the presence of Jesus.  So although I am sad for me, I must rejoice exceedingly for him.

In honor of his life and his loving care of me, I am re-posting this article about my dad (originally posted on Father’s Day, 2012).  I hope it blesses you, my readers. 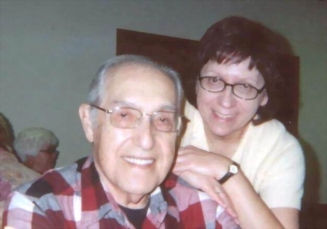 But telling isn’t enough. Kids learn more from what they experience than from what they hear. And when children are told that God is their “Father,” they naturally relate that “Father” to the only other “father” they have experience with – their flesh and blood daddy. I have been inordinately blessed by God’s gift to me of a father who didn’t just talk to me about my Heavenly Father, but who excelled in demonstrating God to me. And although my life of 64 years is full of one experience after another of my dad’s faithfulness to show me God, there are three specific experience that are indelibly embedded in my memory.

The Word tells us that God is a father who enjoys His kids. He enjoyed recreation with Adam and Eve in the Garden; He enjoyed parties when He was on earth in the person of Jesus; He was always instructing Israel to have a party in His presence; and He even says He rejoices over us with singing and dancing. My dad has always been able to get into the spirit of having fun with his kids. When I was very small, he bought me a train that had a real steam engine with sparks and smoke that billowed out as it ran around the track. He delighted in playing trains with me.

But I think the events that stand out most clearly in my memory of a dad who was willing to come down to my level and have fun were the episodes in the grocery stores. My mom, dad, sister, and I always went grocery shopping as a family. That’s often a fun experience for kids, but my sister and I had the privilege of having a dad who wanted to add to our fun. So sometimes, if the store was not crowded, he would roll the shopping cart into a clear aisle, prop one foot on the bottom rung, push off with the other foot, and go flying down the aisle, grinning from ear to ear, all for the sake of bringing squeals of delight to two little girls. I’m sure others thought he was silly, but giving his girls such a treat was worth it to him. Those experiences left us convinced that dads loved to “play” with their kids, and they opened a door between God and me that made me sure I could enjoy Him just like I did my earthly dad.

The Word also tells us that God’s ears are always open to the cries of His children and that He is always present with them in trouble to deliver them. When I was a child, I was plagued by a lot of fears – most of them unnamed and foolish – but there nevertheless. God eventually got control of my life enough to deliver me from all fear, but in early years I often had serious trouble sleeping peacefully. Many nights I woke up sick, but I believe most of it was the result of fear. The cause didn’t matter, however. What mattered was that when I awoke and called for my parents, it was often my dad who immediately heard my cry and came to my side. Certainly my mom was equally loving and attentive, but for some reason my call usually woke my dad first. I have lost count of all the nights he patiently and lovingly gave up sleep to comfort and pray for me.

Once, even as a young adult still living at home, I became ill one night with alarming symptoms. I didn’t call for my parents, but my dad woke and heard me stirring around in the wee hours. He came to check on me and found me sitting in the living room, in the throes of, not only the symptoms themselves, but also the disabling fear brought on by those symptoms. He immediately suggested I make a bed on the living room sofa, gave me two aspirin, sat down in a big chair opposite the sofa, and started talking to me from God’s Word. He spoke God’s truth to me until he had talked me back into faith. He then continued to sit in that chair and promised me that he would sit there and pray until I was back to normal.

Within minutes I was sound asleep. I woke once some time later to see him still sitting in that chair praying. After that night I was totally delivered from that physical problem. But more importantly, my dad’s concrete example made me even more convinced that when my Heavenly Father said He’d be there for me, He’d really be there. I’ve never doubted it once since that night.

The Word also promises us that our Heavenly Father knows our needs and will provide for us liberally. My dad has worked hard ever since I’ve known him. He’s worked hard at earning money, at providing a peaceful and safe environment for our family, at serving the Kingdom of God, and at helping those less fortunate than himself. When growing up, I was aware that we were less than financially prosperous by the world’s standards, but we never felt that we wanted for any necessities. And, somehow, my parents’ efforts and sacrifices managed to provide a few extras as well.

One particular experience of provision during my early college years stands out. I was commuting to school at the time so still living under my dad’s roof. I got up one morning and walked into the kitchen, straight to the bread box, intent on making toast. The box was empty. Now, my dad generally left for work a little before the rest of us woke, and we had only one car at the time, so grocery shopping usually had to wait until he was home. When I saw the bread box empty, I thought, “Oh no! Now what can we do?” I wasn’t anxious to begin my day with a very long walk in the heat to the nearest store. Then suddenly, in the very next second, I thought, “Wait a minute! I know my dad. He would not have gone off with the car for the whole day and left all of us with no bread! I know he had to get us bread!” With that thought I began looking around, and turning to the other end of the kitchen, I saw a brand new loaf of bread in the middle of the table. Dad had been to the store to buy the loaf before he left for work.

That event may seem minor to many people, but at that point, God Himself spoke to my heart and said, “You see: In exactly the same way that you absolutely know without a doubt that your dad would not fail to provide even something as minor as bread, you can also know without a doubt that I will never fail to provide everything you need.” I have thought of this incident many times throughout my life. It has quickened my faith each time. And I have to wonder what my life would have been like if I had not had a dad I could trust so implicitly as my example.

Needless to say, I consider my dad worthy of being named “Father of the Year.” He will always be my winner. And whether he is ever awarded any earthly honors or not, there is an enormous reward awaiting him in Heaven for having exemplified so accurately that Holy Father to whom all creation will eventually bow its knee.